When the country went into lockdown, and the NHS sent letters to those it deemed to be extremely vulnerable to the virus, two members (B and M) from a care company approached me for advice. The members had given their shielding letters to their employer, and the employer had in turn placed them on Statutory Sick Pay (SSP) because they said that there was no work they could do from home, despite the members’ opinions that there was. The members asked me what they could do, and I advised them that the Coronavirus Job Retention Scheme (CJRS) has a provision which allows care companies to use it for employees told to shield.

Her manager initially informed us we were mistaken

On behalf of the members, I approached their line manager and showed them the provision. I asked that both members be put on the scheme to prevent them from falling into debt and financial hardship. The company has no Occupational Sick Pay (OSP) so the without the help of the scheme the members would be forced to try and survive on £95.85 per week (which would not go far in the capital). She in turn referred us to her own manager, who told us that we were mistaken, and that it was not possible to use the scheme in this way. I replied with guidance from the Government, the Department of Health and Social Care, and from Thompson’s Solicitors. She referred us to the Senior Management Team. Time was of the essence, as every day wasted was making life more financially difficult for B and M, but the manager refused to give us a timeline for a response.

Days went by and we decided to contact the Senior Management Team ourselves. We contacted one of the directors, the HR department and the company’s own COVID-19 Response Team. It was the director who got back to us first. He stated that the decision to put the two members onto the CJRS was a policy decision which had “enormous commercial ramifications that have implications for the sustainability of the business”. We did not believe this: the scheme would save the company money, by avoiding SSP. As the company receives public money, they believed they were unable to use the scheme. This was not true, demonstrating the need for more clarity in the scheme availability.

The company performed a complete U-turn

Clearly, we were getting nowhere. Although we did keep asking for updates, nearly all responses told us the issue was being investigated and no more. It was time to turn things up a notch.

The company performed a complete U-turn on their interpretation of the guidance at the grievance hearing, and agreed to use the scheme to help B and M. This all goes to show the power of tenacity. Everyone told us that while they should use the scheme, we could not make them. We continued to pressure the company with the help of the Local Authorities and MPs, and eventually we won.

This case also highlights the flaws in the wording of the CRJS:

“Where social care workers are unable to work for a long period of time, because they are in a high-risk group, or because they are shielding during the outbreak, employers can furlough these workers, to ensure that they continue to receive 80% of their normal income.”

We think that it should state the employers should (or even more preferably must) use the scheme to furlough shielding care workers.

Another flaw in our system highlighted by this case can be found by delving more into M’s story. She has lived in this country since childhood but has yet to be granted indefinite leave to remain, rendering her ineligible for public funds access. This is known as having ‘no recourse to public funds (NRPF)’ and is an awful part of the hostile environment established by Theresa May as Home Secretary and maintained by successive Tory governments. Having NRPF means that M is unable to access Universal Credit or any other form of state aid. Thus, her position when instructed to shield was particularly precarious. We believe that everyone should be able to access help during this outbreak and we want the government to lift this restriction so that migrant workers are not left destitute during this crisis.

Haringey UNISON feels it is very important to share stories like this because they highlight the hard work reps do for members and the impact they can have for members. Please share this with your colleagues and if they are not members of a union ask them to consider joining one.

You can join UNISON by clicking here. 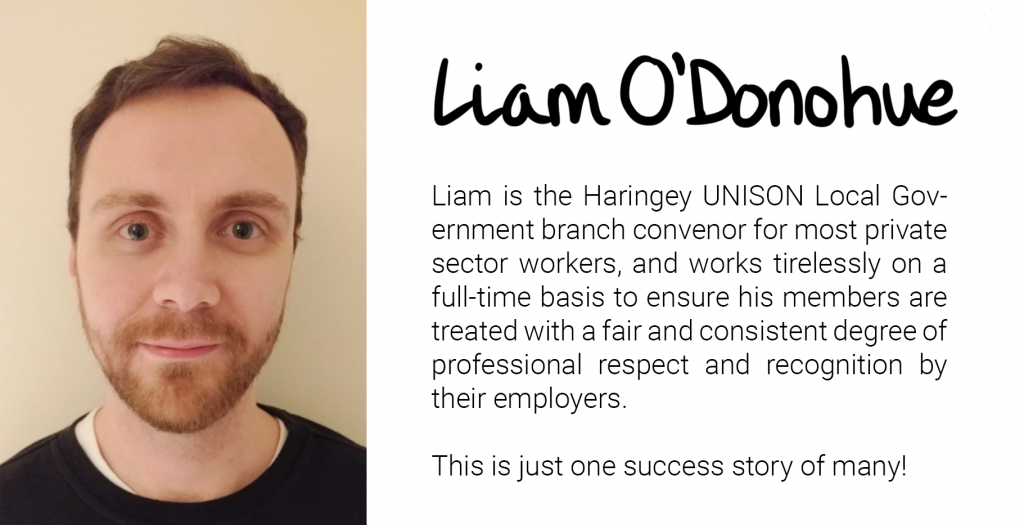 Register your account online today! By keeping your personal information up-to-date you help us stay ship-shape.

We use cookies on our website to ensure you find the information you need in the simplest way. By continuing to use our website you are consenting to their use. Find out more about cookies and how we use them.